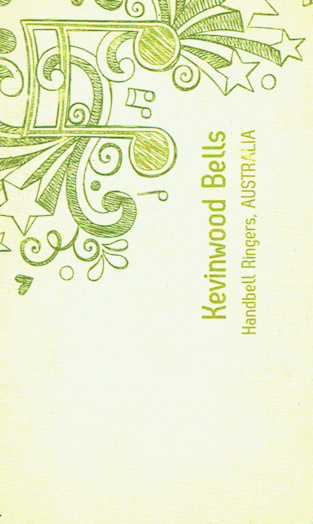 The Kevinwood Bells are an ensemble of the Kevinwood Orchestra of Eastwood , formed after the orchestra returned from a World Youth Festival in Zurich.   Kevinwood Bells represented Australasia at the first International Symposium to be held in Australia in 1994 , sent a small team to Japan where they performed for the Prince and Princess of Japan and travelled to Brisbane for the second Australian World Symposium. They are very active members of the HSA (Handbells Society of Australasia) and have travelled to most capital cities in Australia as well as various locations in New Zealand including Christchurch in 2009, Launceston in 2011 and Perth in 2013.

Their International Symposia appearances include Adelaide , Japan, Brisbane and Vancouver (July 2016) .They were the only Australian team performing at the the Vancouver Symposium, joining 750 players from around the world in massed ringing and also giving two team performances - The Swan (from Saint Saens Carnival of the Animals) and Brubeck's Take Five, both works arranged by team member Peter Hogg. Kevinwood Bells also presented two workshops - one an Australian Cultural "Christmas in July", sharing some of the traditions of this concept with ringers from the northern hemisphere and a second one on Off-Table-ringing, a style historically from England but chosen by Kevinwood as their main style of concert bellringing. Great interest was expressed in this by the delegates.

Always keen for a challenge the Kevinwood bells joined over 400 bellringers around the world in the composition by James Meredith. See the link Virtual Handbell Ensemble. Each segment presented is only a few seconds long, so it is easy to miss - but all of the clips with Australian backgrounds such as The Opera House,Ayers Rock, the Harbour Bridge, kangaroos etc. will be disguised Kevinwood players.

Foundation Ringleader: This email address is being protected from spambots. You need JavaScript enabled to view it.

Kevinwood normally plays on 3 1/2 octaves of Malmark Bells and 4 octaves of Schulmerick chimes, performing in the less-well-known "off-table" ringing style. As well as larger performances of note such as Sydney's Carols in the Domain, Christmas Carols in Sydney Town Hall and St. Marys Cathedral, Kevinwood enjoys ringing four-in-hand (as seen in the Canberra performance)  and takes up  challenges associated with requests for bells in locations or situations with which they have not previously been involved. They performed at the City of Sydney's 'Christmas Choirs in the City' in both November 2018 and 2019.

Membership is limited in number , varying from 6 to 10 players. It is open, when positions are available, to anyone with a desire to ring. Preference will be given to those with an ability to read music and to those who are able to regularly attend rehearsals. Junior players are welcome, either performing with the main team in a limited number of works - or performing with the Junior Orchestra in concert items.

Music:
The repertoire crosses the complete range of mucial styles and has ranged from the "Cantina Band" theme from "Star Wars" to "Phantom of the Opera", Gregorian Chant and even "Stairway to Heaven"

Music Examples - both Secular and Sacred